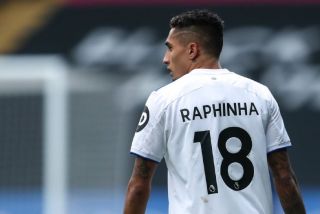 According to a recent report from Italian journalist Gianluigi Longari, Jurgen Klopp’s Liverpool are leading the charge to land Leeds United winger Raphinha.

After making a £16.7m switch from French side Rennes last year, Raphinha, 24, teamed up with Marcelo Bielsa at Leeds United in time for the most recent 2020-21 season.

However, despite only being part of the Whites’ squad for the last 12-months, following what has been an exceptional campaign, there are now suggestions the South American attacker could move on.

Heavily linked with a summer move to some of the Premier League’s biggest clubs, Raphinha’s Leeds United future appears to have been cast into major doubt.

It has been claimed that Manchester United, Manchester City and Liverpool are all interested in the winger.

However, the latest in the ongoing saga comes from Tuttomercato Web’s Longari, who claims it is Klopp’s Redmen who are leading the race to sign the 24-year-old.

Confirmed. Liverpool lead the race for #Raphinha but also Manchester United and Manchester City are following the winger. Not a simple deal cause Leeds want to keep him. #LFC #LUFC #MUFC #MCFC @tvdellosport https://t.co/Pj7ziC5apy

During his debuting season in England’s top-flight, Raphinha featured in 30 Premier League matches and directly contributed to an impressive 15 goals.

Liverpool transfer target reveals his “great friend” in the LFC squad who sent him a special message at the start of the season May 26 2021, 14:47
Liverpool FC