His future isn’t yet sorted at Barcelona, but Lionel Messi is still getting on with what he does best. Putting the ball in the back of the net.

The Argentina captain scored a penalty opener for his country in their World Cup qualifier against Chile, though it was ultimately in vain as former team-mate, Alexis Sanchez, equalised and another former colleague, Claudio Bravo, was inspired in goal to keep Messi and Co. out.

MORE: What on earth has Rio said now?!

Messi also hit the crossbar as he tried everything to get the win to honour Diego Maradona.

“It has been a long time since we got together, it’s not easy. At times we were very good creating pressure and in the ball recovery phases of play. We played a good game. It was difficult and they didn’t create many situations,” he said after the game, reported by Mundo Deportivo.

“Diego is always with the national team. It was a very special match as it was the first without him.

“[…] It’s a shame to play without people but it is what we have to do.

“We wanted to give him the victory and represent the national team as he did, leaving everything on the pitch.” 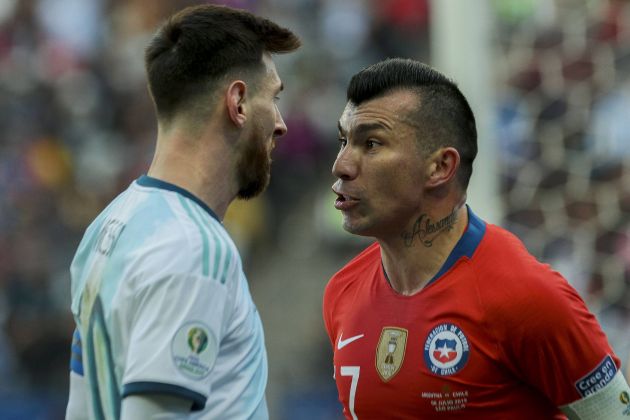 Messi in a previous Argentina vs Chile encounter

Although it’s still to be confirmed, it now seems more than likely that Messi will stay at Barcelona, and that’s good news for the new president, Joan Laporta, the squad and the supporters.

With a two-season deal expected, we can be assured that Messi will want to win the Champions League one last time with his club, though a Copa America or World Cup victory with Argentina will be just as high on his priority list.