It wouldn’t be summer without a flurry of Manchester United transfer gossip, with the Red Devils always one of the busiest and most ambitious clubs in the transfer market.

Last year, Man Utd brought in some big names in Donny van de Beek, Alex Telles and Edinson Cavani, with the latter of those proving a real hit at Old Trafford.

Of course, United don’t always get it right, and Van de Beek and Telles, fine players though they are, have not really made any impact so far.

That surely means we’ll see changes in the MUFC squad in the near future, with as many as four new faces possibly coming in, if recent transfer rumours are anything to go by.

First up, could a new goalkeeper be a priority for United? David de Gea got the nod over Dean Henderson in the recent Europa League final, but he didn’t exactly cover himself with glory.

Henderson also wasn’t entirely convincing after starting to play Premier League games ahead of De Gea, but then the Spaniard failed to save any of Villarreal’s eleven penalties in the recent shoot-out in Gdansk.

According to the Sun, United could now try offering De Gea to Atletico Madrid in a bid to sign Jan Oblak to be their new number one.

The 28-year-old has been a world class performer for Atletico and seems ideal to give United an upgrade in goal next season.

He could also be joined by his Madrid team-mate Kieran Trippier, who has supposedly told England colleagues that he wants a summer move to Old Trafford, according to the Daily Mirror.

This could be a key signing for the Red Devils as it may allow Ole Gunnar Solskjaer to change his formation, with the Sun reporting that the Norwegian tactician could to a back three, whilst moving Aaron Wan-Bissaka to centre-back.

If United pull this off, that could give them a very strong looking back five, as you can see in the formation below… 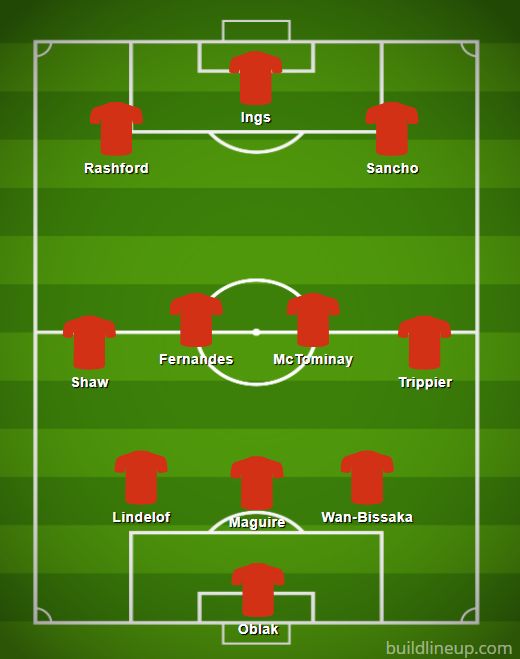 There could also be changes up front for Man Utd, with Jadon Sancho and Danny Ings possibly both coming in this summer.

The Daily Mirror report that progress is being made on a deal to sign Sancho from Borussia Dortmund, and potentially for quite a lot less than he would’ve cost last summer.

Unless Solskjaer plans on playing Sancho up front or centrally, this signing would surely mean a front three, with Anthony Martial and Mason Greenwood perhaps having to make do with less playing time.

In a central role, Ings seems a realistic option to replace the ageing Edinson Cavani, with the Telegraph recently claiming United had approached Southampton about the player.

Ings had a fine season in the Premier League and certainly looks like he could do a job for a bigger club, with his previous time at Liverpool only really going wrong for him due to injuries.

Cavani had a fine impact at United in his first season but surely can’t be a starter week in, week out next term, with Ings surely a useful option who could come in without United needing to spend a fortune.

Interestingly, if this is how United line up next season, that extra defender means there doesn’t appear to be room for Paul Pogba.

Bruno Fernandes would surely be the first choice alongside a more defensive-minded midfielder in either Scott McTominay or Fred, so it remains to be seen how Solskjaer’s potential tactical change affects one of his biggest-name players.