Liverpool fans can surely expect some big transfer news involving their club this summer after a disappointing trophyless season in 2020/21.

The Reds failed to mount a strong defence of their Premier League title, slipping to third in the table after some sloppy performances, particularly at home.

It seems like Jurgen Klopp may now be in need of transitioning into something of a new era at Liverpool, with Georginio Wijnaldum leaving the club, while players like Roberto Firmino, Sadio Mane and Joel Matip don’t look quite as good as they did at their peak.

Liverpool surely need to spend big on getting back to the level they once were, and they’ve already moved to secure the signing of Ibrahima Konate in defence.

The young Frenchman shone at RB Leipzig and looks an ideal long-term partner for Virgil van Dijk, bringing Liverpool more depth at the back after so many injuries in that department last season.

But LFC mustn’t stop there, with a Wijnaldum replacement also needed, and one ideal candidate seeming to emerge, if latest Liverpool transfer gossip is anything to go by.

According to Belgian news outlet Het Nieuwsblad, Leicester City midfielder Youri Tielemans is one player being looked at in that position, with the Belgium international supposedly feeling he may have played his last game for the Foxes.

After some superb displays for Leicester in recent times, Tielemans has surely shown he could be the perfect signing for Liverpool, who can also offer him the Champions League football that has eluded Brendan Rodgers’ side time and time again.

Another Premier League raid could come in the form of a swoop for Leeds United winger Raphinha, who had a hugely impressive season at Elland Road.

Raphinha has been linked with the Merseyside giants by journalist Gianluigi Longari in the tweet below, but it’s clear the Brazilian will have other big-name suitors this summer…

Confirmed. Liverpool lead the race for #Raphinha but also Manchester United and Manchester City are following the winger. Not a simple deal cause Leeds want to keep him. #LFC #LUFC #MUFC #MCFC @tvdellosport https://t.co/Pj7ziC5apy

MORE: Liverpool fans will LOVE their new away kit

Still, with Mane suffering a particularly worrying dip in form last season, the signing of Raphinha makes perfect sense to help Liverpool replace the Senegalese attacker on the left-hand side of their front three.

Konate, Tielemans and Raphinha could be three signings to make all the difference for Liverpool as they look to bounce back next season and continue the fine achievements of 2018/19 and 2019/20. 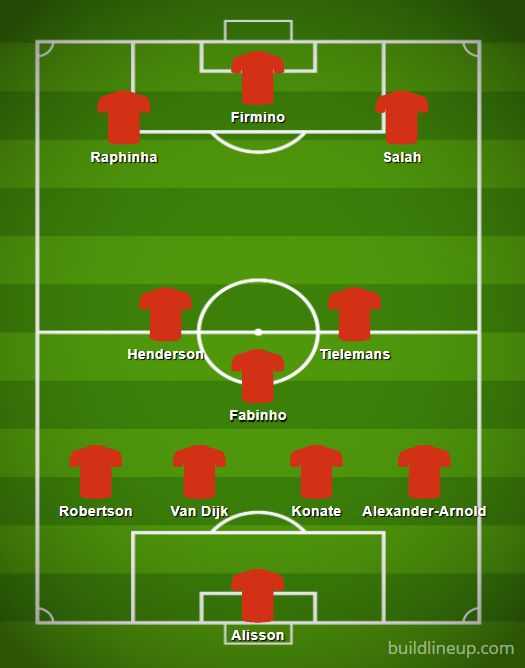 As well as Mane being out of the team, it also looks like it could be hard for last summer’s big signing Thiago Alcantara to get a regular starting spot.

Of course, over a long season there will no doubt be room for rotation, but this probably looks like Liverpool’s strongest starting XI on paper.

Although Thiago shone at Bayern Munich, he hasn’t made the immediate impact some might have expected at Liverpool, with the 30-year-old not quite looking at home in the fast-paced system that Klopp prefers.

Alcantara is no doubt a quality player, but his possession game might have made him better off at a Manchester City or a Barcelona, whereas Liverpool would surely benefit from the speed and directness of Tielemans’ game in the middle of the park.