Liverpool are reportedly in talks over the transfer of want-away Leicester City midfielder Youri Tielemans.

The Belgium international wants the move to Anfield, with personal terms not expected to be a problem, as per the tweet below… 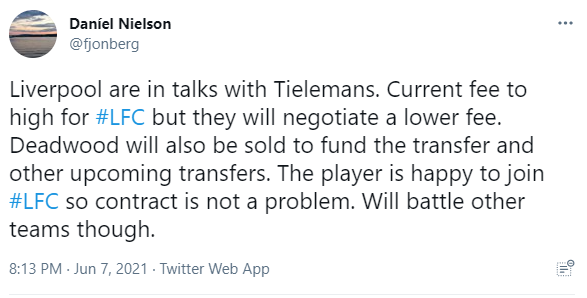 Liverpool would do well to land Tielemans as a replacement for the departing Georginio Wijnaldum, though it seems they’re likely to have rivals for his signature.

Tielemans’ fine form at the King Power Stadium, including his memorable winning goal against Chelsea in the FA Cup final, has shown what an asset he could be to a number of top clubs.

Liverpool urgently need a new midfielder, however, and have also been linked with the likes of Saul Niguez and Yves Bissouma.