Manchester United are seemingly the surprise favourites to seal the transfer of Chelsea striker Tammy Abraham this summer.

As noted by Stretty News, the Red Devils are currently placed above a number of other clubs as the favourites with Sky Bet to be Abraham’s next club.

See below as you can get 11/4 on United being Abraham’s next employers, which might not be as crazy as it sounds… 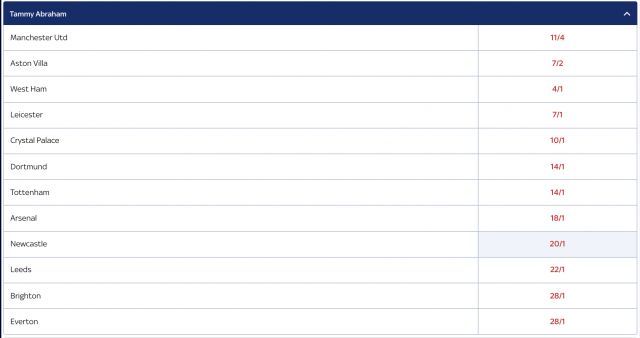 Although it’s not that common for big six rivals to buy and sell off each other, we have perhaps seen it a bit more in recent years, especially with Man Utd.

Juan Mata and Nemanja Matic are among the players to recently join United directly from Chelsea, and they have also notably raided Arsenal for the likes of Robin van Persie and Alexis Sanchez.

Abraham might not be the most obvious signing for MUFC, but they could undoubtedly benefit from more depth up front.

Edinson Cavani had a great first season in Manchester, but at his age he probably can’t start games week in, week out for much longer.

Abraham would be another useful source of goals, even if he’s not exactly set the world alight during his time at Chelsea.

The 23-year-old showed plenty of promise when he was a youngster, however, so could still have it in him to improve at a big club as long as he gets more opportunities than he’s managed under Thomas Tuchel.

Aston Villa, West Ham and Leicester City are close behind United on the list above, and one imagines Chelsea would rather sell to those teams than to a more established big six rival like United.