He’s already one of the most sought after players in the Premier League, and if Jack Grealish has a great Euro 2020 for England, his value will soar.

That’s unlikely to present a problem for Manchester City who continue to be linked with the Aston Villa captain.

According to Duncan Castles on his Transfer Window podcast, cited by The Sun, the Citizens have a genuine belief that they’ll be able to push a deal through.

“They think there is a real possibility of getting him, partnering him with Phil Foden in an English midfield pairing.”

That would mean Villa having to find a replacement, with Castles also suggesting that Villa have already found the man they want. 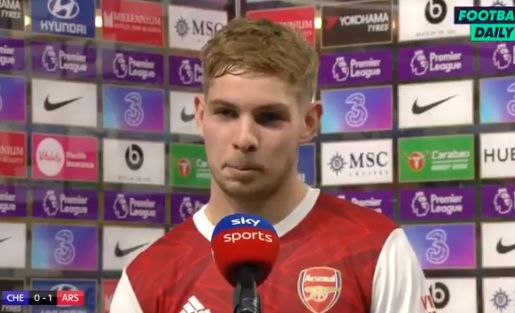 Emile Smith Rowe is a target for Aston Villa

“They have signed Emi Buendia this week as a half-replacement and they are looking at other attacking midfielders.,” he continued.

“One of those without a doubt is Emile Smith Rowe at Arsenal.

“Something needs to be done by Arsenal in terms of extending his deal or they may see him tempted by other clubs.

“It would be quite damaging to lose a young talent to a club like Aston Villa.”

Given that Arsenal are yet to tie down one of their brightest young talents, Villa can take full advantage of their insouciance.

Though losing Grealish would be a massive loss for the Midlanders, Smith Rowe showed just what he can do in the handful of games he was given by the Gunners last season.