There’s no doubt that this is going to be a huge summer for Mikel Arteta and Arsenal, so it’s expected that the squad will see a major overhaul with some important players leaving and arriving.

It’s starting to become clear that no position is safe and it appears that the club are open to strengthening in all areas, and that’s evidenced as you can comfortably make a strong starting XI out of those players who have been linked with a summer transfer: 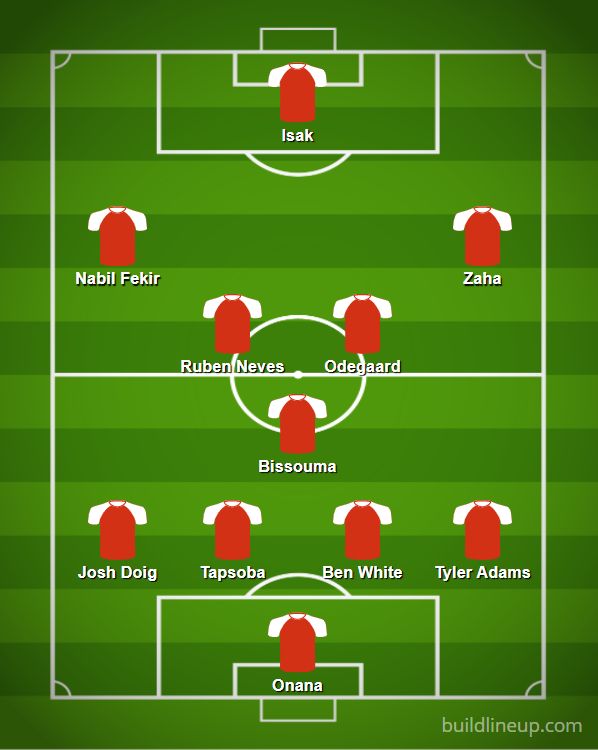 Obviously most of those rumours aren’t going to come true, but some of the links are persistent and strong so it does make you wonder who will actually arrive at the club this summer.

Andre Onana is one of the more interesting links here as he is banned until November so patience is needed, but NOS have indicated that he could cost as little as €9m and he does have everything you would want in a top-class goalkeeper. There’s a chance that he will need time to return to his best and that would result in a strange situation where Bernd Leno will need to be kept on for another year even though he knows he’s likely to be replaced, but this really is a high-risk, high- reward type signing.

If you purely look at the goals against column then Arsenal’s defence was the third-best in the Premier League last season, but too many mistakes were made and daft goals cost them at key moments. There’s no doubt that Kieran Tierney starts when he’s fit, but another option is needed and the links with Hibs defender Josh Doig haven’t gone away. Playing for Arsenal may be too much of a step-up for him at this point, but he does have the potential to be a great player if he’s trusted to play a back-up role straight away.

David Luiz’s exit does open up a spot in the centre of defence which may be filled by the returning William Saliba, but this looks like one position that could be given a serious upgrade as there are rumours of a big-money signing coming in.

It’s been reported today that the Gunners are willing to pay up to £50m to sign Ben White from Brighton which would give them someone to build around for years to come, while Bayer Levekusen’s impressive centre-back Edmond Tapsoba is another potential option.

A new right-back may be the biggest need in defence if Hector Bellerin does move on. Cedric is a solid option but he’s not good enough to start for a whole season, so the links to RB Leipzig wing-back Tyler Adams do make sense. He’s still young but he’s playing at a high level and looks like he could develop into a top-level wing-back in the future, but convincing Leipzig to sell could be tough.

Martin Odegaard could still be the player that fills the hole in the team left by his departure as his future isn’t clear at Real Madrid, but it does look like the base of the midfield will be strengthened, especially if Granit Xhaka does move on.

Yves Bissouma is winning a lot of admirers at Brighton for his impressive performances this season and there’s a feeling that he can step up to a bigger club, while the Daily Mail reported today that Arsenal are hoping to beat Liverpool to his signing.

Ruben Neves is also seen as a direct replacement for Xhaka if he does go and he does look like an upgrade given how impressive he’s been for Wolves, while it’s even reported that the deal to sign him could be close.

Some of the attacking rumours are more comforting as they seem to come around at least once a year – Wilfried Zaha has been threatening to leave Crystal Palace for a while now and the links to Arsenal have resurfaced, while Nabil Fekir was an old target from back in his Lyon days and it’s suggested that Arsenal are now keeping tabs on him at Real Betis.

A new number 9 will be needed soon as Lacazette’s future is uncertain and Aubaemyang is getting older and he’s coming off a bad season, so Real Sociedad’s Alexander Isak looks like an interesting option.

He’s bouncing back in Spain after he made the move to Borussia Dortmund too early in his career, and he’s now adding goals to his game as a prolific scorer to go with some excellent link-up play.

You could also fill a bench with some of the other rumors going around and you can be sure that more will come, so it will be fun to see who actually does arrive at Arsenal this summer.