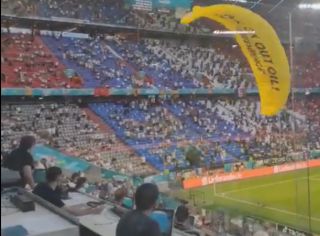 We’ve seen some pretty incredible opening entertainment in Euro 2020, although it still feels like nothing will beat the RT car which carried the ball out to the centre circle in the opener.

There was someone who was parachuting down into the ground before the France vs Germany tonight, and it really cannot be underestimated how close they are to smashing into a section of the crowd as they slightly lose control:

Can't believe I just caught this on video. Parachuted into the stadium, got caught in the spider cam and nearly crashed into the crowd. Hope he's ok! #GERFRA #EURO2020 pic.twitter.com/PJ49WYdFM9

They are going at some speed so if they hit the seats or accidentally kick someone in the head then it could be a total disaster, and it actually sounds like it was a protester rather than someone who was meant to be part of the event:

The start of tonight’s Euro 2020 game between France and Germany in Munich was disrupted by a protestor parachuting into the stadium https://t.co/jDXlTfr8UX #Euro2020 #FRA #GER #FRAGER pic.twitter.com/VFFeWQefBU