It’s now pretty clear that Spurs didn’t really have a plan to replace Jose Mourinho when he was sacked last season, but that wasn’t an immediate disaster.

Ryan Mason was unlikely to get the job on a permanent basis but it gave him a chance to prove himself, while it also gave Spurs a few weeks to get their house in order before making an exciting appointment for the fans.

It’s now reached a point where you genuinely have to wonder what’s going on, but the current odds from Skybet indicate that nobody really knows who’s actually going to get the job either: 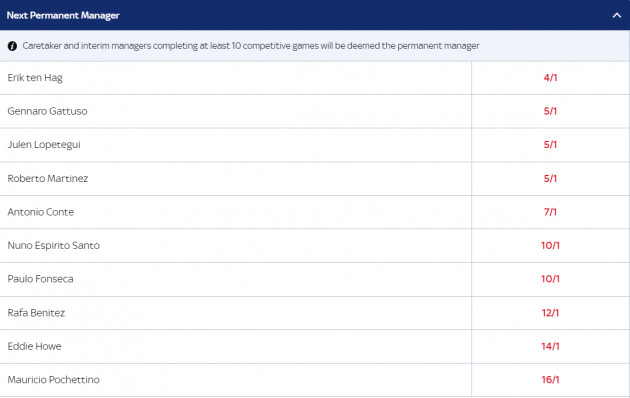 A lot of those names will be pretty familiar to the supporters, and a large reason for that is because they’ve been heavily linked with the job, many have even been in advanced talks only for a potential deal to collapse at the final moment:

Tottenham are not planning to re-consider Paulo Fonseca or Gennaro Gattuso as candidates in the next hours – both deals 100% off, same for Pochettino who’s considered “untouchable” by Paris Saint-Germain since May. ?? #THFC

Board now back at work to find the right manager.

It’s also been reported that the current favourite Erik ten Hag has already held a zoom call with Spurs to discuss the job and that ended with him making the decision to stay with Ajax, while Antonio Conte was thought to be close to the role before talks collapsed late on.

The biggest concerns from the fans has to centre around the long-term outlook of whoever is appointed – it either looks like the new boss won’t be the club’s first choice, it could also be the case that Spurs werent’ their first choice either, and it can’t be filling the supporters with confidence at this point.