Chelsea’s wing-backs certainly weren’t a weakness last season under Thomas Tuchel, but if it’s possible to sign someone who could be seen as a huge upgrade then perhaps it still makes sense to bring them in.

Achraf Hakimi proved that he should be seen as a world-class wing-back last season at Inter Milan so it’s obvious that the biggest teams would be interested, while he can also play on either flank so that just makes him even more attractive.

Italian journalist Alfredo Pedulla has been offering updates on the chase for Hakimi over the past few weeks, and this suggests that PSG are now in pole position to bring him in: 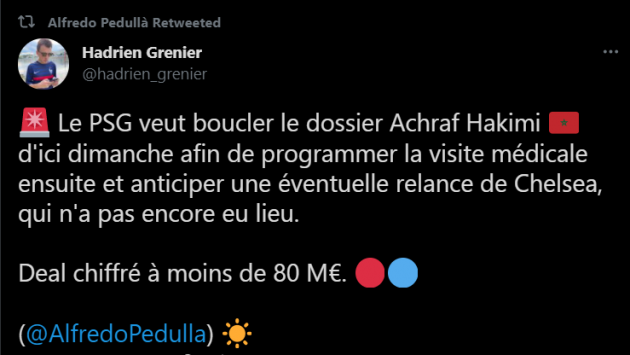 It’s claimed that PSG want to get this deal tied up by Sunday and they already have plans in place for him to undertake his medical, whole they are confident of getting the €80m transfer tied up before Chelsea have time to come up with an acceptable offer.

The Parisians have usually had right-backs who are good without being great, so signing Hakimi would suddenly give them a real strength from the position instead of it being seen as a weakness.

From Chelsea’s point of view he may be more of a luxury signing instead of being a necessary one due to the presence of Reece James, but he would’ve been an upgrade who would suit Tuchel’s system very well.