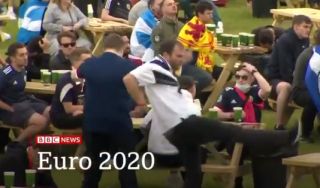 One Scotland fan was spotted hilariously trying to break a table in anger…and failing miserably.

Watch the video clip below, which sums up just what a big disappointment Euro 2020 has been for Scotland and for their supporters…

????? This annoyed Scotland fan went to kick the table and missed…#CROSCO | #EURO2020 pic.twitter.com/jIgZ85zXad

Despite earning a 0-0 draw with England, Steve Clarke’s side were hugely disappointing overall, losing to the Czech Republic and Croatia.

This fan made his anger clear, but still didn’t have quite enough in him to properly follow through by breaking the table.