Former Manchester United ace Timothy Fosu-Mensah has spoken out on his most “passionate” former team-mate at Old Trafford.

The 23-year-old left Man Utd to join Bayer Leverkusen back in January, and many fans seem keen to keep in touch with him, judging by the exchanges he had in a quick Twitter Q&A this morning… 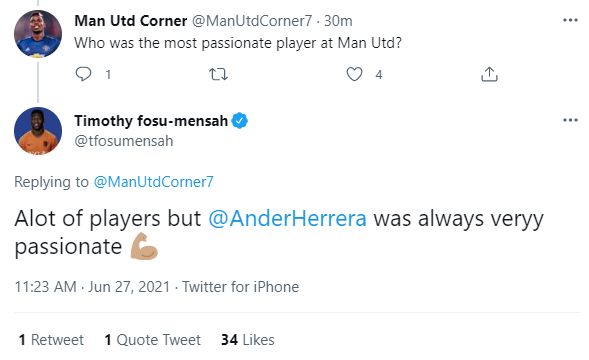 One of the most interesting responses was this one, in which Fosu-Mensah talked up Herrera’s passion – another former United player who recently left the club.

The Spaniard joined Paris Saint-Germain and some Red Devils supporters will miss that passion with which he used to defend the shirt.

Fosu-Mensah also looked a promising young player in his time at United, but it just didn’t quite work out for him, and he’s yet to really get going in the Bundesliga either, making just seven appearances for his new club in the second half of last season.

Other highlights included Fosu-Mensah describing Scott McTominay as the best Scottish player he’s played with, though we’re not sure there’s a huge amount of competition in that department.