We’ve had a look at how England international Declan Rice could fit in at Manchester United or Chelsea, amid rumours that he has rejected TWO West Ham contract offers.

New broke via the Telegraph this morning that Rice had snubbed approaches from the Hammers to extend his contract, with both Man United and Chelsea thought to be interested in signing him.

The Telegraph’s belief is that West Ham would demand £100m in exchange for their prize asset, which would make Rice one of the most expensive players in football history.

Rice has been one of the stars of England’s Euro 2020 campaign so far. He looks well-equipped and sufficiently mature to deal with the expectations that’d come with a big-money move to a top club.

Whether Man United or Chelsea will make their interest concrete in the coming weeks remains to be seen, but we’ve considered how both sides could lineup, were Rice to sign along the dotted line.

MORE: How Manchester City could lineup after completing £88m signing of Jack Grealish 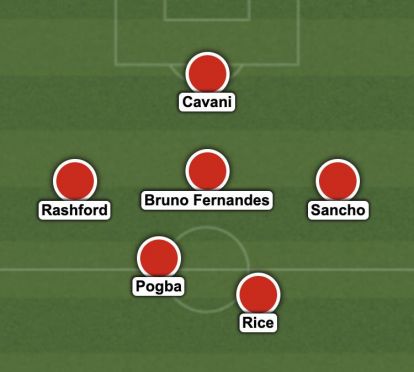 Paul Pogba has received much acclaim for his performances for France at Euro 2020. Much of his success in the attacking third can be credited to N’Golo Kante, who holds down the fort and allows Pogba to stroll forward.

While it’s unclear whether Ole Gunnar Solskjaer would be willing to play Pogba in a two-man pivot in the bigger games, against lesser sides who sit back, he could thrive alongside Rice in the pivot of the midfield.

Rice could operate for Man United as he does for England, stepping back to receive the ball from the centre-backs before distributing to his teammates and starting the attack. He may well be the holding midfielder United have been crying out for. 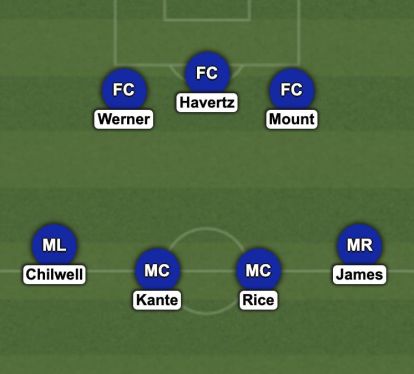 Chelsea’s midfield was influential in their Champions League success, with Jorginho and N’Golo Kante virtually flawless throughout. However, they do not possess a midfielder quite like Rice.

Jorginho is a ‘regista’ type, with Kante being a box-to-box destroyer. Mateo Kovacic is not an archetypal defensive midfielder, either, so Rice would bring something different for Thomas Tuchel in the middle of the park.

Rice is a former Chelsea academy player and remains best friends with Blues posterboy Mason Mount. On paper, a return to Stamford Bridge looks like the most fitting option for the 22-year-old.