Arsenal are no stranger to having a striker in the last twelve months of their contract, as it’s happened with Robin van Persie, Alexis Sanchez and Pierre Emerick-Aubameyang in the recent past.

The latest player to face that situation is Alexandre Lacazette as his deal expires in the summer of 2022, and it led to Chris Wheatley being asked about his future in an Instagram Live Q and A: 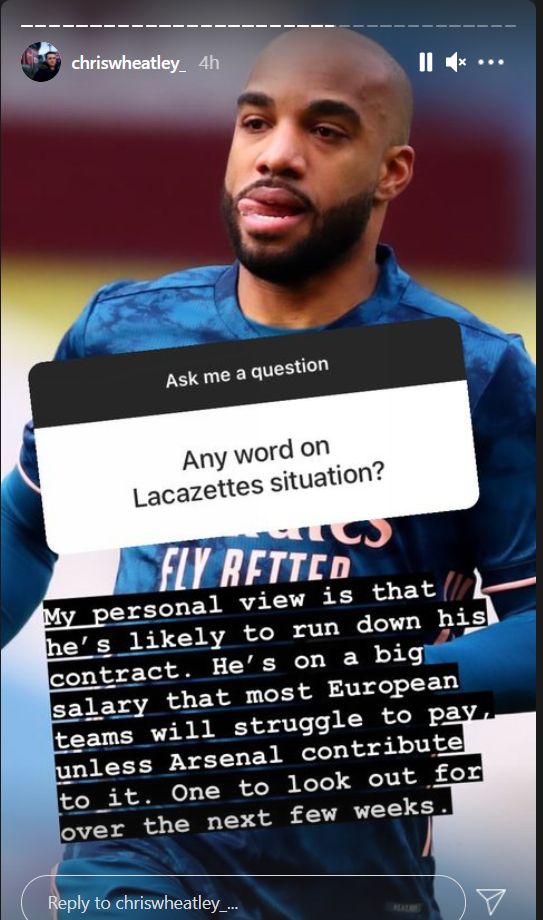 It’s an interesting situation for Lacazette because he turned 30 in May and that means his next move will probably be his best chance to secure one final big contract, and that will be easier to do if there’s no transfer fee involved.

The biggest sides often have problems offloading players in high salaries unless they are a star, and the issue with Lacazette is that he’s a very good player but he’s not good enough for one of the elite sides to build around him for the next few years.

There could also be a knock-on effect if he stays as it’s likely to limit playing time for players like Martinelli, Nketiah and Balogun, while Lacazette could even become the third choice player if another striker is signed.

It appears that if Arsenal could sell him then they would certainly be open to letting him go, and Wheatley’s point about keeping an eye on this in the next few weeks suggests it’s still not really clear what could happen.

Antonio Conte and Brendan Rodgers tipped to take over at the Emirates as pressure grows on Arsenal’s Mikel Arteta
Aug 31 2021, 8:25
Arsenal FC
West Ham linked with late swoop for £12.8M Arsenal striker who is in the final year of his contract
Aug 29 2021, 8:02
Arsenal FC
Perspective? An entire XI of Arsenal players currently out injured or ill
Aug 24 2021, 11:31
Arsenal FC
Arsenal provide updates on ELEVEN players currently out with injury or Covid-19
Aug 24 2021, 10:32
Arsenal FC
Barcelona consider Arsenal duo as swap deal options but will need to sell this attacker first
Aug 15 2021, 11:50
Arsenal FC
Arsenal looking to do more business with Newcastle as they attempt to solve keeper crisis
Aug 15 2021, 6:54
Arsenal FC
Aubameyang and Lacazette doubts for Arsenal as response is required against rivals Chelsea
Aug 14 2021, 14:37
Chelsea FC
Neville and Carragher lay blame for Arsenal defeat on player that makes them ‘uncomfortable’
Aug 14 2021, 7:38
Arsenal FC
Huge blow for Arsenal as Aubameyang and Lacazette are ruled out of Premier League opener
Aug 13 2021, 13:21
Arsenal FC
Arsenal throw a spanner in the works that could affect Chelsea’s transfer plans
Aug 12 2021, 9:37
Chelsea FC