Man United were genuinely seen as title contenders at the turn of the year last season before a poor run of results, and it does look like they’ve realised that major additions were needed to this squad.

The biggest problem had to be in the centre of defence where a variety of combinations were tested out, but there’s nobody who can form an effective partnership with Harry Maguire.

That has the knock-on effect where United have lost the fear-factor for opposing teams who know that cheap goals will be conceded, so the rumours linking them with Raphael Varane would sort that.

It also looks like Jadon Sancho’s signing is pretty much agreed for next year, while the latest story tonight indicates that Eduardo Camavinga could also be on his way to Manchester:

Rennes would be open to negotiate on potential €30m fee – as they’d lose Camavinga for free next summer. ??

He’s one of Man Utd long term targets – PSG have always been interested too.

If the Rennes’ midfielder does arrive then it’s been reported that Paul Pogba could leave as a result, but here’s how they could line-up next season if all three deals do go through: 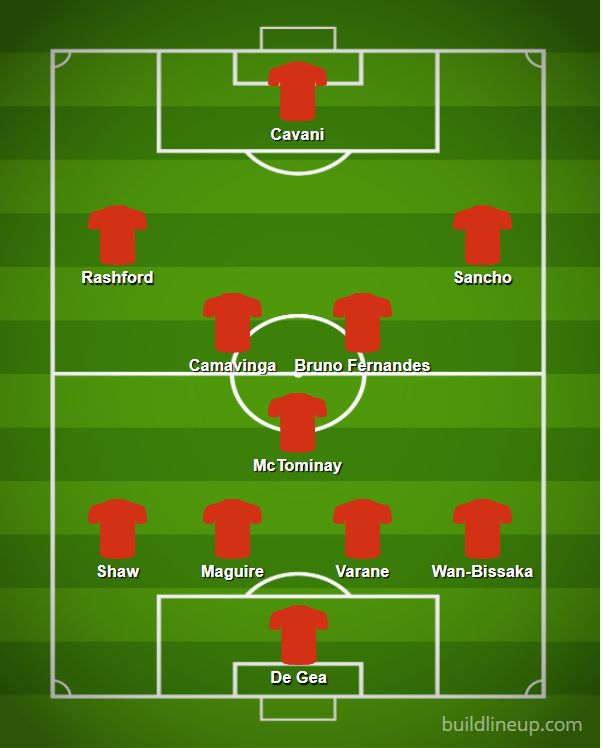 If you were being picky then it could be fair to suggest that a true holding midfielder would be helpful for some of the bigger games, but suddenly United would have a team that should be solid at the back, while they would also have the extra weapons in attack to unlock a tight defence which has been a problem at times.

Mason Greenwood could alternate with Cavani as the number 9 so the only real question mark comes down to the goalkeeping position, but that still looks like it’s going to be either de Gea or Henderson.

In terms of a title challenge you would expect Chelsea to put up a strong fight, Liverpool will bounce back as they’ll be able to field an actual defence again and Man City should be as strong as ever, but this United team would certainly have enough to be included in the race.