Rio Ferdinand’s comments provide some insight into how Jadon Sancho will react amid rumours he has been dropped this evening.

According to reports, Sancho will be the only player not to keep his place in the England starting XI for tonight’s Euro 2020 semi-final with Denmark at Wembley Stadium.

It’s claimed Arsenal star Bukayo Saka will come in for Sancho as Gareth Southgate makes a minor tweak to his starting XI with a Euro 2020 final on the line.

Win here and the Three Lions will progress to a home final on Sunday night against Italy, who defeated Spain on penalties last time out.

If reports are accurate, Sancho is likely to be very disappointed over not making the team having played a part in that 4-0 quarter-final win over Ukraine last time out.

But as Ferdinand has already pointed out, as cited by the Mirror, the soon to be Manchester United star has already shown how well he can react to such situations.

“Sancho is a great example. He came in after not playing the first four games,” Ferdinand said recently. 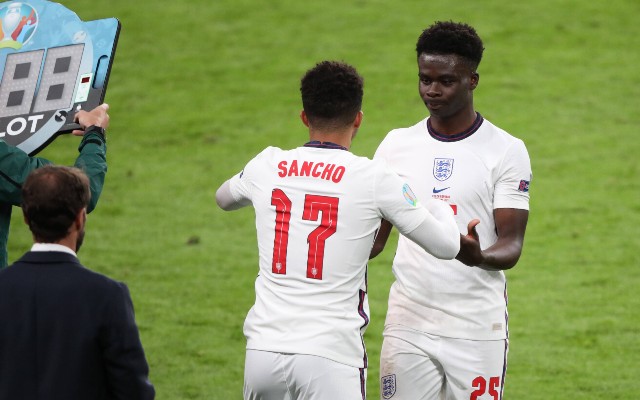 “Look back at other teams, my teams for example, they’d have been sulking around the camp, speaking to their agents at home, when they get the excuse they’d be looking for excuses saying ‘I’m not fit enough’.

“These guys are professionals. They know what their job is and they go out and do it to a tee.

“I think our squad at the time had more world-class players. This team has a better squad, a much better squad.

“Players come in and change the game, there’s no drop off in the quality of players at all.”