Arsenal are reportedly progressing and talks over a transfer deal for Wolves midfielder Ruben Neves.

The Portugal international has been a star player for Wolves down the years, but recent transfer rumours suggested the club were ready to cash in on him for the right price this summer.

It now seems the Gunners are stepping up efforts to bring Neves to the Emirates Stadium, with journalist Nicolo Schira claiming they’ve offered him a five-year contract… 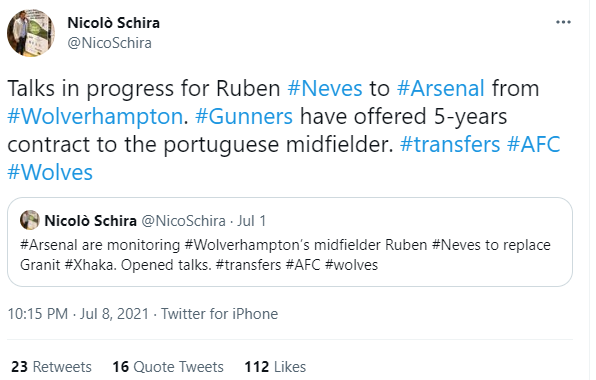 This could be superb business by Arsenal if they get it done, with Neves looking ideal to replace Dani Ceballos in Mikel Arteta’s midfield.

The Spain international didn’t have the desired impact in two years on loan from Real Madrid, and has now returned to his parent club.

Neves is a similar style of player but is more proven in the Premier League, so could be a smart signing on the cheap as Wolves look to offload him for the right price.