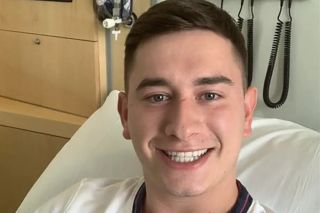 As most of the country were celebrating an England win over Denmark in the Euro 2020 semi-final on Wednesday evening, Manchester United fan, Sam Astley, was recovering from donating stem cells.

That wouldn’t normally be newsworthy or out of the ordinary, except for the fact that Astley had a chance to go to the semi-final at Wembley, a once-in-a-generation experience for many.

His girlfriend, Beth Hill, had won tickets in a raffle, but according to the Evening Standard, once Astley had been informed he was a match for for someone in need via the Anthony Nolan stem cell register, there was never any doubt in the 24-year-old’s mind that he wanted to make the potentially life-saving donation.

Once news of his actions spread like wildfire on social media, a campaign was set up to try and get him tickets for the final. “As an official sponsor of Uefa Euro 2020 we wanted thank him for his selfless lifesaving donation, so have arranged for Sam and his girlfriend to attend the final England v Italy match this Sunday at Wembley as guest of vivo,” they said in a statement.

“We hope that both of them enjoy the experience.”

Heartwarming to know that there are still some really good people in the world.