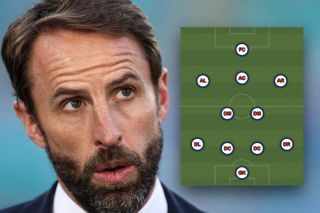 Today is the day, with England taking on Italy at Wembley in the Euro 2020 final. After 55 years of hurt, football might actually be coming home.

Though the Italians, led by former Manchester City manager Roberto Mancini, will pose a threat like nothing England have encountered at the tournament to date, the Three Lions will fancy their chances of winning the game.

Last time out, a narrow 2-1 victory over Denmark, which Gareth Southgate’s men required an extra thirty minutes and a penalty to win, was less convincing than the two games which preceded.

However, Southgate will have a huge amount of pride that the players that he fielded avoided the England knack of bottling it at the pivotal moment, which leaves us expecting him to field the exact same side.

That’d see England line up in a 4-2-3-1 system, a bold choice from Southgate who could be forgiven for being a little conservative considering what’s at stake. With Phil Foden a doubt for the game with a foot injury, as is reported by the BBC, what an opportunity this could be for Arsenal teenager Bukayo Saka to prove his worth on the biggest stage.

Southgate’s men do have the ability to revert to three at the back, were the game not going in their favour. We’ll have to wait and see how things play out after the whistle is blown…