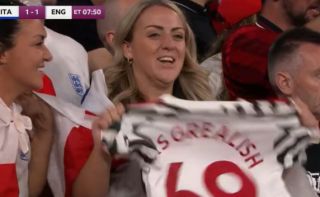 Aston Villa and England star Jack Grealish clearly has a big fan in the crowd tonight!

Interesting that it’s a Manchester United shirt she’s holding up too…a clear message about where she’d like Grealish to be playing next season?

Grealish didn’t start tonight’s game between England and Italy but has been subbed on during extra time.

Jack Grealish is a class act!