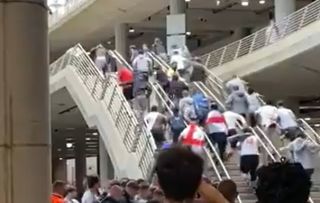 For at least a year the entire country has had to put up with restrictions on public life and football stadiums lying empty for most of the season, and we all need that to change for the next campaign.

Football without fans is nothing, and the Euro 2020 campaign has given the fans a chance to show that we can behave in a normal manner and that the restrictions should be lifted.

Unfortunately, you now have to feat that the opposite is true, with some utter reprobates letting the whole country down and embarrassing their fellow supporters with some of the behavior that we’ve seen outside Wembley tonight:

People trying to get into Wembley without tickets pic.twitter.com/qwqWrXAUsc

The reaction has been utterly predictable as it gives everyone who dislikes the England fans more ammunition, and there are now even claims that the game could be delayed if this trouble doesn’t subside:

What an awful image. Football’s been great but the organisation of Euros, from host cities to travel to fans has been embarrassing

I just pray no one gets hurt #ITAENG

Kick off likely delayed. Yet again, Europe must wait while the Brits finish up embarrassing themselves.

#EuroFinal #EURO2020 Kick Off for The Euro Final is at risk of being delayed or even cancelled due to a large number of fans without tickets breaching the gates and gaining access to the stadium. https://t.co/WDlWOYerH9

Wembley looks quite empty 65 minutes before kick-off – was it like that for the semi-finals, or have the security breeches delayed kick-off? #Euro2020Final

Don't be surprised if kick-off is delayed tonight.
https://t.co/RIwV0Uu4Cw