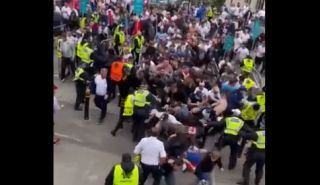 Security at Wembley are struggling as huge numbers of fans seem to have stormed into the stadium without tickets ahead of tonight’s Euro 2020 final.

People trying to get into Wembley without tickets pic.twitter.com/qwqWrXAUsc

Some fans have attempted to storm into Wembley ahead of the Euro 2020 final?pic.twitter.com/XyYRRXBFHY

Febrile atmosphere at Wembley. This is near the main entrance to Club Wembley a few minutes ago where it looked like a group of fans broke through the security cordon. Stewards currently chasing people around. Not sure they’ll get all the way to the wine and canapés pic.twitter.com/YTIx8eQLz2

This could get out of hand and we hope it doesn’t in any way disrupt the kick-off tonight as England look to end 55 years of hurt.

The atmosphere has been great at this tournament as fans have returned to stadiums, but we also need to see better behaviour from some as the big occasion gets to their heads a bit.