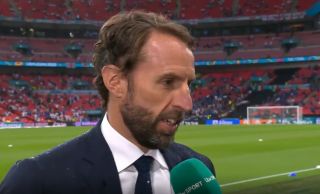 England suffered a devastating defeat against Italy in the Euro 2020 final at Wembley Stadium on Sunday night, and manager, Gareth Southgate, will have felt that more than most, even putting a time limit on how long he has left on the managerial hot-seat as a result.

There’s little doubt that this is a squad in the manager’s image.

Intelligent, socially aware and with no little skill, they are a team to make the country proud, and even in defeat, there’s unlikely to be too many genuine fans that will bemoan Southgate’s impact since taking charge.

However, the England manager is clear that he won’t be hanging around in the position.

“I don’t think now is an appropriate time to be thinking about it [how long to stay as manager]. We have to qualify for Qatar,” he said after the match, cited by Sky Sports.

“I need time to go away and reflect on Euro 2020. I need a rest. It is an amazing experience but to lead your country in these tournaments takes its toll.

“I said at the time it is great to have that internal support, you greatly value that as a manager.

“I want to take the team to Qatar, I feel we have made progress over the four years, we have had a fourth, a third and a second-placed finish and that is as good as anyone.”

Though the disappointment will be raw for a while yet, the Football Association will know that there’s no better person to be leading the team.

Whether he can be persuaded to stay on after Qatar will largely depend on how the Three Lions fare if they qualify.