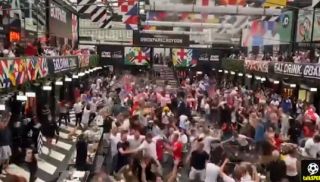 The morning after the night before, and the carnage across London that will have greeted the army of street cleaners will be the clearest reminder of what some supporters believe is the right way to follow England.

It’s easy to love this Three Lions vintage. Gareth Southgate is the very best of us, and he has instilled not just a different playing mentality for his staff, but a much better code of conduct.

Players with a genuine social conscience not afraid to stand up for what they believe in.

And yet, for all the good that the players have done across the tournament, it’s another one that’s going to be remembered for the way in which fans of a certain age behaved.

Storming Wembley, throwing bottles at each other in a Leicester Square that resembled a war zone, kicking lumps out of each other once the booze kicked in… and then some.

The very worst kind of supporter who, frankly, it’s easy to detest.

Is that what these people honestly believe it means to be a true and loyal follower of the Three Lions?