Priti Patel’s office have refused to comment on the blistering attack from Aston Villa and England defender Tyrone Mings following the Euro 2020 final.

Mings was part of the England squad at this summer’s Euros, with Gareth Southgate’s side putting together a fine run before losing on penalties to Italy on Sunday night.

Unfortunately, Bukayo Saka, Jadon Sancho and Marcus Rashford were on the receiving end of disgraceful racist abuse after missing their spot-kicks in the shoot-out, leading to Patel condemning their behaviour.

However, Mings was clearly not convinced as he laid into the Home Secretary in this tweet below, accusing her of stoking these fires after her previous comments on the England players’ decision to take a knee before games…

You don’t get to stoke the fire at the beginning of the tournament by labelling our anti-racism message as ‘Gesture Politics’ & then pretend to be disgusted when the very thing we’re campaigning against, happens. https://t.co/fdTKHsxTB2

Everton remain interested in Championship star
Video: Chelsea star arrives in Germany ahead of potential move
West Ham look to make £33m signing in position of real need ahead of next game

Mings’ tweet has unsurprisingly caused quite a stir, with around 140k retweets at the time of writing.

Patel’s office, however, are not looking to be drawn into a row, as per BBC journalist Lewis Goodall in his tweets below… 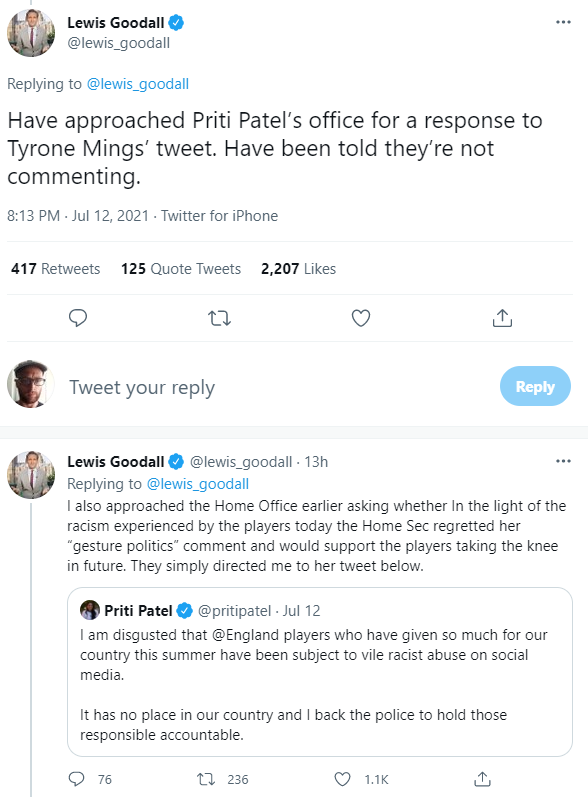 This is certainly not a great look for the government, who have bizarrely been at war with the England team this summer.

Prime Minister Boris Johnson has also criticised the players for taking the knee, while Tory MP Lee Anderson made it clear he was boycotting the team due to their support of the Black Lives Matter movement.

Another Tory MP, Johnny Mercer, has, however, backed Mings and hit out at his party for their handling of this issue.