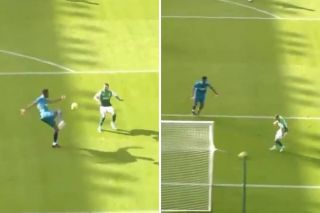 Arsenal are BACK, and they’re already entertaining rival fans with their comical defending.

The Gunners are taking on Hibernian this evening in their first pre-season friendly, with 19-year-old Arthur Okonkwo getting the nod in goal.

While even featuring in a pre-season fixture for Arsenal will have been a major career (and life) landmark for the teen, he’s off to a disastrous start.

MORE: Talks held: Arsenal to step up bid to complete £50m transfer after conclusion of Euro 2020

Cedric Soares played the ball back towards his keeper, which was bouncing and awkward, but all he needed to do was put his foot through it and clear the danger.

Somehow, with the teenager evidently losing concentration during the biggest game of his career so far, he missed the ball entirely, allowing Hibernian to score a gift of an opener.

The Arsenal faithful will be dearly hoping that there isn’t more of this to come from their side in the upcoming campaign.

Mikel Arteta will probably be thankful that they’re getting these errors out the way now, though, rather than on the opening day against Premier League new-boys Brentford.