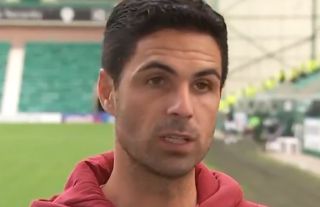 There’s no doubt that this summer does feel like a turning point in the Arsenal rebuild, but Mikel Arteta is going to come under some serious pressure for his job if they don’t have a good start to next season.

He’s been able to turn for the excuse for a couple of seasons about getting new ideas across and perhaps that this isn’t his squad of players, but enough time has passed and signings have been made so that doesn’t fly anymore.

It was immediately clear that their friendly against Hibs wasn’t going well when “Arteta Out” was trending, and you can see he’s laying the early groundwork for excuses going into the new season:

??"Overall it was a really good night for us."
??"It is about the workout today and getting ideas."@HibernianFC boss Jack Ross and @Arsenal manager Mikel Arteta have their say after the Scottish Premiership side won 2-1 in a pre-season friendly.pic.twitter.com/F7lJDeozaS

It’s a pre-season game against a decent team so it’s not a disaster, but all he simply has to do is acknowledge that and move onto the next game, so having a little moan about a goal being offside does give off the air of a desperate man.

There’s still plenty of time for this season to be a success, but the All or Nothing cameras do have a tendency to come along when a team is about to descend into shambles and that has to be a worry for Arsenal fans just now.