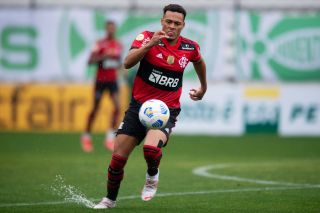 Flamengo forward Rodrigo Muniz is one of the more popular names linked to European clubs on the South American transfer market.

Brazilian media outlet O Dia reports that Inter Milan is in contact with the player’s representatives. Furthermore, the information states that the Serie A club promises to send an official proposal soon and promises to join the fight to have the center forward.

The talks started last week and are getting hotter between Rodrigo Muniz’s and Inter Milan’s businessmen. Flamengo, by the way, has already been informed that the Italian side is in contact and plans to send an offer in the coming days.

Flamengo is open to selling, but with interest from Atlético de Madrid and Inter Milan, the price has gone up. The report adds that the Brazilian giant agrees to negotiate for Muniz, but Flamengo has increased the asking sum for the attacker from €5-million to €8-million.

The 20-year-old has made 24 appearances and has scored five goals during his time with Flamengo.