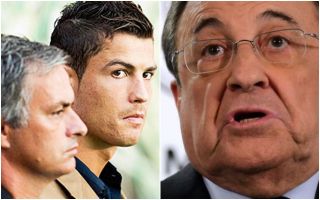 Perez will be embarrassed at these clips emerging, as he can be very clearly heard revealing his real feelings about the pair, with some strong words for both Ronaldo and Mourinho.

MORE: 10 most likely transfers this summer

“He is mad,” Perez said of Ronaldo, as per El Confidencial. “This chap is an imbecile, he is ill.

“Do you think this chap is normal? He is not normal, otherwise he wouldn’t do the things he does.

“(Jorge) Mendes does not order him, nor does he order Mourinho whatsoever. Zero. Not even for the interviews. These are guys with huge egos, both of them spoiled.

“He and the coach don’t see the reality because the two could earn a lot more money if they were different. They are both abnormal because we are talking about a lot of money in image rights.

“Furthermore, with that face they have, with that defiant manner that they are disliked by everyone….Advertising is the opposite, it is the complete opposite.”

Just a reminder that Ronaldo is probably Real Madrid’s greatest ever player, and indeed one of the best in footballing history, having scored 450 goals in 438 appearances for Los Blancos to finish as their all-time leading scorer, whilst guiding them to four Champions League victories in his time at the Bernabeu.

Mourinho, meanwhile, also won La Liga and other major honours in his time as Madrid boss, though in fairness his time with the club certainly didn’t end too well.

These audio clips follow Perez also previously slamming two other club legends, Raul and Iker Casillas, as reported by ESPN and others.