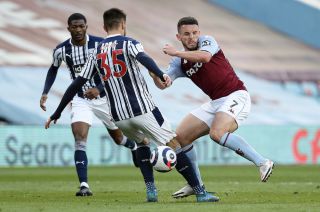 Celta Vigo is facing problems in their efforts to offload midfielder Okay Yokuslu with the Spanish side hopeful they can receive €6m for the player’s services. However, despite enjoying an impressive season last time out with West Brom, the midfielder is now wanted by Patrick Vieira’s Crystal Palace – the problem? – The Eagles are only interested in landing the midfielder on loan.

That’s according to a recent written report from Spanish outlet Mundo Deportivo (as relayed by Sports Witness), who claims the Turkey international could be set for another move back to England’s top-flight.

The biggest obstacle Crystal Palace face is convincing Celta Vigo to allow their defensive midfielder to leave on another loan.

However, with just two years left on his current deal, it’s not hard to see why the club would rather cash in now than see him move on a temporary basis, only to return next year with a much lower valuation.

Since joining Celta Viga in 2018, Yokuslu has gone on to feature in 72 matches, in all competitions, scoring twice and assisting a further two, along the way.