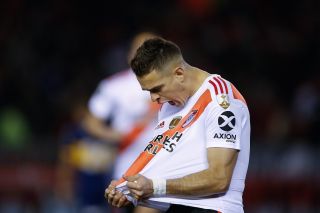 As the Copa America was nearing its end, some players suiting up for their national teams had decisions regarding their future. For former River Plate forward Rafael Santos Borré, it meant finding a new club.

The 25-year-old is heading to the Bundesliga as he joins Eintracht Frankfurt. Now that his departure is official, the Colombia international spoke about why he decided to leave this summer and not renew his contract with the Argentine side.

Santos Borré made an appearance on ESPN (via Bolavip), discussing his departure from the South American giant on a free transfer.

“It is difficult to assimilate that today I do not play with River, recently I was in that beautiful dressing room, and it is difficult to leave a place where one was so happy, but it was time for a new challenge. It’s a nice opportunity for me,” Santos Borré said.

The Colombian forward doesn’t state why he decided to choose the German club since there were various proposals for his services. Santos Borré adds that other offers were very lucrative, but it seems as though he wanted another shot in Europe.

Nonetheless, he noted that the project presented by Eintracht Frankfurt was a serious one which is why it piqued his interest.

Santos Borré adds that other offers were very lucrative, but it seems as though he wanted another shot in Europe.

“I had very good offers from the economic point of view, from Arabia for example, but I wanted to continue growing in my career, and I came across a serious project in which I can become a significant part. That is what the player has to think,” Santos Borré said.

River Plate starlet departs on a free transfer to a sign with Bundesliga side Eintracht Frankfurt Jul 1 2021, 6:31
River Plate

‘He’s a player he always liked and would love to have on the team’ – São Paulo FC physical trainer confirms the clubs’ interest in River Plate starlet Mar 8 2021, 23:55
River Plate