Did Rafa Benitez say ‘doner kebab,’ completely out of context, during an Everton press conference?

He appears keen on replicating that, but this time referencing kebabs, rather than facts.

This is the weirdest thing you’ve read all day – we’re well aware of that – but stick with us here.

As Benitez outlined his philosophy heading into his first season as Everton manager, it sounds as though he wanted to say ‘don’t give up,’ willing his players on to give their all for 90 minutes.

However, clearly dreaming about his local kebab shop and what he was going to sink his teeth into at dinner time, he’s instead said ‘doner kebab,’ in a bizarre slip of the tongue.

Have a watch for yourself, on the 23 second mark…

We mean not to mock Rafa or his Spanish accent, this is just rather, unintentionally, funny from the Toffees manager.

Besides, it’s not often that kebabs get a shout out from Premier League managers in their pressers. It’s a top tier meal and deserves more mainstream coverage. 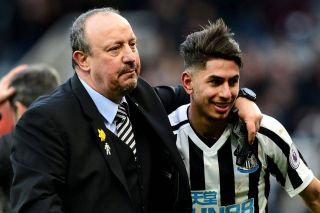