Anyone who’s every been on Twitter knows it’s 95% morons hiding behind fake profiles trying to gain attention by spouting off opinions that they’ll never say in public.

That’s only made worse by social media companies doing absolutely nothing to actually stop it, so there will come a point where football players and even the general public stop using it and it quickly becomes pointless.

There’s been an interesting situation over the recent days involving Gini Wijnaldum, as he stated that one of his main reasons for leaving Liverpool was because of the online trolls,, and it’s led to this response from club legend Jamie Carragher: 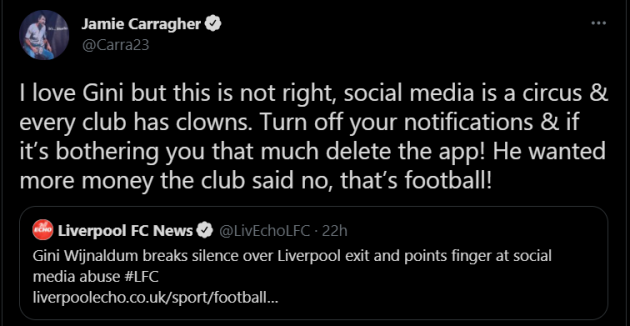 Let’s not forget this is Jamie Carragher telling him to simply ignore abuse – the same Jamie Carragher that literally spat in a child’s face because he didn’t like someone paying him attention, so the hypocrisy is overwhelming in this case.

There are also allegation of racism in the abuse directed towards Wijnaldum so simply being told to ignore it and then being painted as the villain for earning more money simply emboldens the morons here, and it’s no surprise that Carragher is taking some backlash on this one:

Carragher being a corporate clown coming out again.

I love carra but this is not right, if people harass you in a car wind your window up every club has clowns. Maybe drive off and don’t spit at them

It’s SO disappointing to see someone with this much influence and such a big platform to victim blame those people who have experienced abuse on social media.

There is still time to delete the tweet, i am more surprised that you wrote it then re-read it and still thought it’s a good idea to tweet it

This is disgraceful. Gini shouldn’t have to mute his notifications and delete the app. It’s wrong to be abusive to him in the first place when he most likely has social media to connect with the fans who care/cared about him and share important parts of his life with us.