A statement from the Premier League has announced how all 20 clubs will show their support for Ukraine this weekend.

The Premier League has announced that all club captains will wear special armbands in the colours of Ukraine, with fans encouraged to show their support with a “moment of reflection and solidarity before kick-off at each game.”

All of the logos and profiles across the digital Premier League channels will be edited to represent the Ukrainian colours.

It’s not often you see huge corporations taking sides in situations like this, but the severity of what Russia has done, has forced the Premier League into taking action. At the beginning of their statement, it reads: “The Premier League and our clubs wholeheartedly reject Russia’s actions.” This is a move from the Premier League to show support to the country, especially with multiple Ukrainian players representing clubs in the league.

The screens inside the stadiums will display “Football Stands Together”, with a backdrop of the Ukrainian colours.

Over the last week, one positive to take is the amazing support shown to the three Ukrainian individuals who play in the Premier League. West Ham allowed Andriy Yarmolenko some time off and Vitaliy Mykolenko and Oleksandr Zinchenko shared a touching moment on the pitch, before the Everton versus Manchester City game. 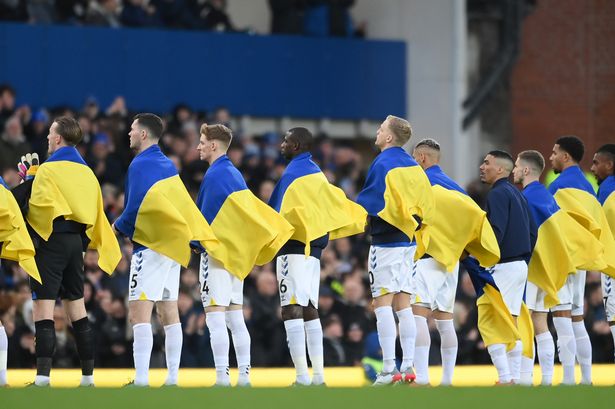 The Everton players showed their support, walking onto the pitch with Ukraine flags around the shoulders of each of them. Zinchenko and Mykolenko were visibly touched by this moment.