The media storm surrounding Cristiano Ronaldo’s outburst on Saturday is refusing to die down. Following Manchester United’s 1-0 loss to Everton, the Portuguese superstar lashed out on his way down the tunnel, smashing a child’s phone out of their hand.

In the aftermath Ronaldo tried to repair the situation in terms of public relations by saying sorry to the child and putting the incident down to his intense desire to win, as reported by the Manchester Evening News. He also offered the child free tickets to a Manchester United game by way of apology.

That doesn’t appear to have patched matters up for Ronaldo though. The child’s mother rejected his apologies and Merseyside Police are currently carrying out an investigation into the incident. 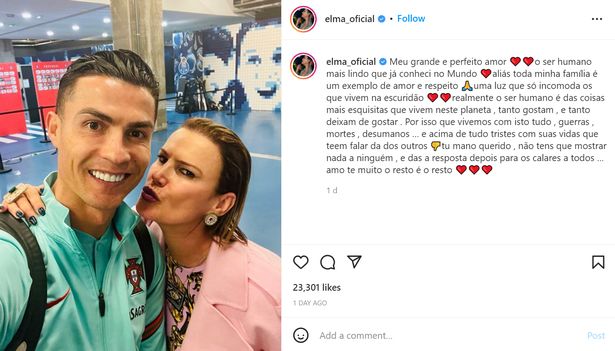 As Ronaldo’s character is called into question, his sister leapt to his defence on social media, posting the following on her Instagram account.

“The most beautiful human being I’ve known in the world. All my family are an example of love and respect. A light that only bothers those who live in darkness. My dear brother, you don’t have to prove anything to anyone and give the answer afterwards to shut everyone up. I love you a lot. The rest is the rest.”

His show of frustration reflects the current mood at Old Trafford. Ronaldo has scored 18 goals for the Red Devils but his return has been less than glorious, part of a wider dissatisfaction with the season’s progress at Manchester United.