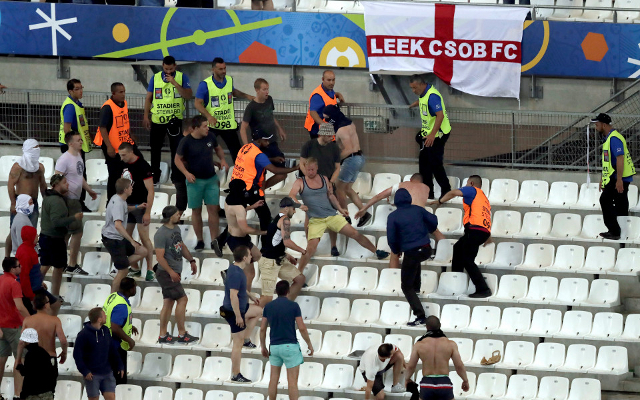 England and Russia fans clashed in Marseille on Saturday night, with a third day of unsavoury scenes in the city leading to further injuries and arrests.

French police were forced into using tear gas and a water cannon to disperse crowds on the streets of the port city, but there were also clashes inside the Stade Velodrome during the 1-1 draw between the two teams.

Flares were seen to be left off by Russian fans during the game, before they broke a barrier between rival supporters and made their way across to England supporters where there further distressing scenes.

More arrests and injuries were reported and scuffles continued during the night, and it has led to widespread condemnation from both football and governmental authorities.

It remains to be seen whether or not the police can gain control of the situation in the coming days, as ultimately the scenes off the pitch are overshadowing what is happening on it.

England were held to a 1-1 draw by their Group B rivals on Saturday night, with Vasili Berezutski scoring an injury-time equaliser after Eric Dier had given his side the lead.

However, that has been pushed into the background given the unrest, with reports suggesting that although England fans are involved in the incidents, they are being targeted by both Russian supporters and locals in sporadic attacks.

That brings into question the entire security operation in place in Marseille, as ultimately the police are failing in keeping all supporters safe and preventing such scenarios from presenting themselves.

Russian fans in Marseille are storming all restaurants and bars and hurting any #ENG fans they say. Disgrace. pic.twitter.com/He7N8A0uHC

English fans are now searching for Russian fans who attacked them earlier, armed with chairs from a bistro. pic.twitter.com/w8pdBcK5LX

Water canon being used on rioters, bangs heard across the city, lines of police marching through the streets pic.twitter.com/x1og3J96RG

A group of Russians chant after launching a volley of bottles up a street pic.twitter.com/OOyV5prfjF