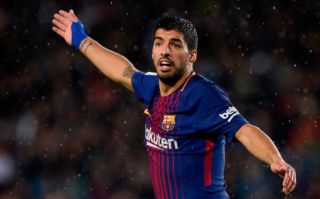 Barcelona are reportedly lining up Genoa striker Krzyisztof Piatek as a possible replacement for Luis Suarez after his impressive start to the season.

The 23-year-old has made quite the first impression after his summer move to Italy, scoring seven goals in just three appearances in all competitions, with three goals in two Serie A outings.

In turn, that would suggest that Genoa have landed a potentially great player who could prove to be a fundamental part of their push to improve this season, but reports in Spain have gone one further.

According to Don Balon, despite his inexperience and lack of longevity to prove he can deliver at the highest level on a consistent basis, the Polish forward is already being eyed by Barcelona as a potential long-term replacement for Suarez.

It’s not the first time that the link has been made either, as The Sun noted earlier this week that the Catalan giants were said to be considering a swoop, as per reports in Italy.

Suarez has enjoyed a glittering spell at the Nou Camp since arriving from Liverpool in 2014, scoring 154 goals in 202 games while winning a whole host of trophies.

Although he scored 31 goals in 51 games last season, there has been a decline in his numbers having gone from a staggering 59 goals in the 2015/16 campaign to 37 the following year and then 31 last season.

Further, there’s no denying that he is also now on the wrong side of 30 as prepares to turn 32 in January, and so question marks have to be raised over how long he can continue to deliver consistently as Barcelona’s main option up front.

In turn, it arguably makes perfect sense that they’re searching for a long-term successor now so that they can come in and support Suarez initially before taking over the reins with less pressure on their shoulders to deliver immediately.

Nevertheless, Piatek certainly seems like a name that has come from nowhere following on from his impressive start to the season, and Barcelona will surely want to see him continue to score goals regularly in his first full season in Italy first before making a concrete move.