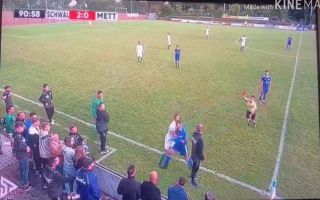 Given the amount of abuse players take it’s probably a miracle that this type of thing doesn’t happen more often. Of course the most famous example was Eric Cantona but a German player absolutely lost it last weekend.

He was originally sent off for throwing a punch at supporter, but once he saw the red card he absolutely lost it and had to be restrained by an opposition player.

Admittedly the spectator needlessly makes it difficult for him to get the ball back but the player has to be more professional and not behave like this.

Red card after attacking a spectator. Happened in a German amateur league this weekend. from r/soccer