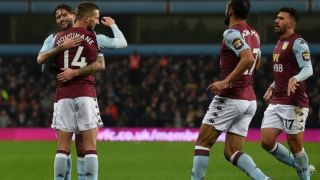 Aston Villa secured a 5-0 win over Liverpool in their League Cup clash on Tuesday, although it wasn’t exactly the strongest Reds line-up.

With the senior squad in Qatar for the FIFA Club World Cup this week along with Jurgen Klopp, the club’s youth players were tasked with trying to advance past Villa.

Although they did make a bright start to the encounter, they weren’t able to make it count as they eventually leaked goals and were 4-0 down by half-time.

While they did well to limit it after the break, it will be a crucial experience for many of these young players as Liverpool also set a new club record by naming their youngest starting line-up ever.

With that in mind, it will have felt a bit surreal and not quite as enjoyable for Villa to rattle off such a comfortable win over Liverpool and naturally they received a lot of sarcastic comments in response after the game.

Rather brilliantly though, they faced up to that and used it to create the tweet below, and naturally it had everyone in hysterics and calling for the Villa admin to get a pay raise.

Top marks for this hilarious effort, as it certainly described the situation perfectly as Villa will just be delighted that they got the win and have now advanced to the last four.