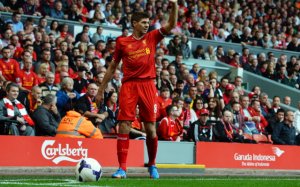 What a campaign the experienced England international is enjoying on Merseyside under the astute management of Reds boss Brendan Rodgers, with the Northern Irishman having taken the decision to drop his skipper back to now play as a defensive midfielder at Anfield.

And with quite some impressive results too, with the 33-year-old having not only managed to be on target on seven occasions so far in the Premier League, but the inspirational skipper has also created an eye-catching ten goals for Reds team-mates in just his 22 league outings in this campaign.