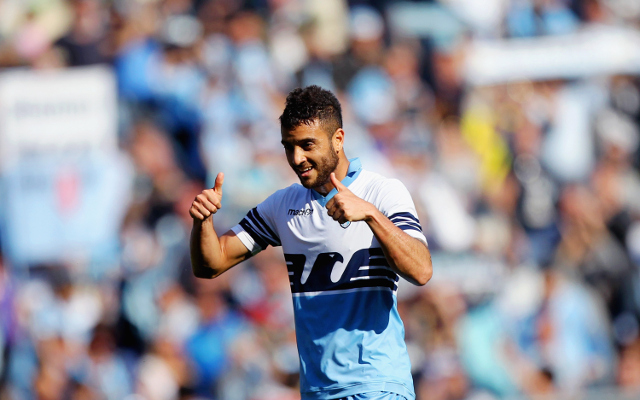 According to reports in Italy, Manchester United are still considering Lazio attacking midfielder Felipe Anderson as a potential replacement for Robin van Persie.

The Red Devils have previously had an offer of €50 million rejected by the capital club, but may well look to return to Lazio with an improved offer for the player, according to the Gazzetta dello Sport.

The Italian source report that United have not ruled out a new approach for the attacker, despite being frustrated in their previous attempts to bring him to Old Trafford.

One solution may be for Dutch striker Robin van Persie to be included in the deal.

The Netherlands international is coming off the back of a testing campaign in the Premier League; he has scored only 10 goals and has admitted that he finds his situation at the club “strange and difficult” [via ESPN].

The forward is currently in Italy and has been linked with a move to Serie A, with both Lazio and Juventus linked with a move for the striker. Turkish giants Galatasaray are also rumoured to be interested in the hitman [all via the Daily Star].

It remains to be seen, however, whether the former Arsenal man will be willing to leave Manchester, having previously dropped a big hint that he is planning to be at the club next season. The Netherlands hitman recently revealed that he is looking forward to playing alongside new recruit Memphis Depay next term [Daily Star].

United may well face competition from their fierce local rivals Manchester City in their hunt for the talented Brazilian.

According to the Daily Mirror, the Citizens have also declared an interest in the forward, but, having signed a contract at Lazio until 2020, the player’s agent has insisted that he is not looking to leave Lazio right now.

The versatile attacker managed 10 goals in 32 appearances in Serie A last term, helping the Biancocelesti to an unexpected Champions League berth.