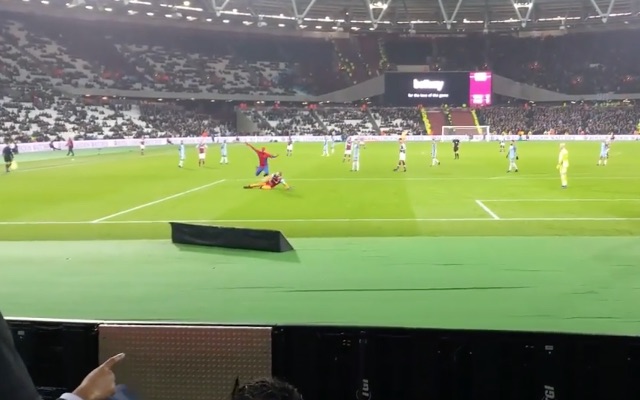 BBC One broadcast a live FA Cup Match of the Day programme on Friday night, showing every minute of Manchester City’s 5-0 win at West Ham.

Well, almost. The Beeb decided to cut away from the pitch for the dying seconds of the match, showing scenic shots of the outside of the London Stadium, instead of the fun that was going on inside it.

This was because pitch-invaders got on the pitch and BBC bods were probably worried about broadcasting bad things and encouraging naughtiness.

However, there was no streaking.

There was no violence.

In fact, the pitch-invaders were actually pretty original and amusing.

One was dressed in a full Spiderman suit, while the other donned a West Ham shirt with yellow trousers.

The duo decided to entertain the loyal Hammers fans who had stayed to the end, giving them something fun to remember on what was otherwise an awful night.

Spiderman played the role of Pablo Zabaleta as they reenacted the penalty decision from the first half. Old yellow pants played Angelo Ogbonna and the referee in a rather impressive piece of amateur dramatics.

Shame the BBC didn’t let you watch the drama live. It was way better than their version of Eastenders!