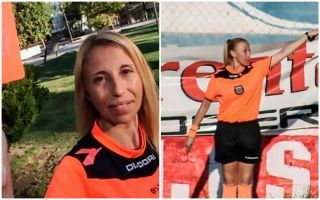 A shocking story from Argentina has emerged after a female lineswoman suffered burns after boiling water was thrown at her during a game.

An investigation has been launched after the incident occurred during the clash between Marquesado and San Martin.

As reported by The Sun, an error was made by another official in the latter stages of the game with the hosts losing 1-0.

It’s then added that a ‘fan’ threw a flask of boiling water at Rosana Paz in anger over the decision, which led to the 46-year-old requiring treatment.

“There were two minutes left of the match and I felt that they had thrown hot liquid on my back,” she said of the incident. “In that moment, I called the main referee to tell him what had happened and I asked them to throw cold water on me to calm the burning heat.

“I don’t have any injuries from the hit (from the flask) but I do have to look after the infections in the wound. I hope this doesn’t happen again, because it was me, but it could be any of my colleagues.

“We have to end this violence on the pitches. Families are now coming with fear of these acts and football should be a party.”

It’s hoped that Paz makes a full recovery, but also importantly that the ‘fan’ responsible is identified and banned, while further measures are taken and put in place to avoid a repeat of such disgraceful scenes in the future.