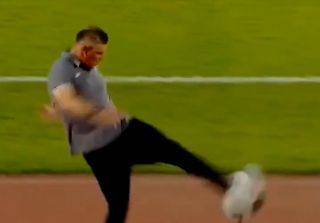 It’s often said that a player’s style on the pitch doesn’t necessarily translate into their managerial style, but it looks like Savo Milosevic has taken his aggression and passion into the dugout.

He was a legendary goal scorer at Partizan Belgrade and will be remembered by Aston Villa fans for his spell in England, but he’s now back in Serbia as manager of the club.

His striker was taken out with a cynical foul in their game today, and he absolutely LOST IT:

Savo Milosevic completely loses it after a foul is not called and throws his water bottle at the referee and kicks a mic on his way out.

Partizan went on to lose 3-2 to Vojvodina in stoppage time.

The ref gets a water bottle launched in his direction before he takes his anger out on a microphone as he’s sent off, while we have to think his mood will have worsened after his team lost the game by conceding two late goals.

The length of the ban for this could be interesting…

READ MORE: Video: Partizan defender Soumah does a decent impression of The Rock as he drops the People’s Elbow on a Vojvodina player