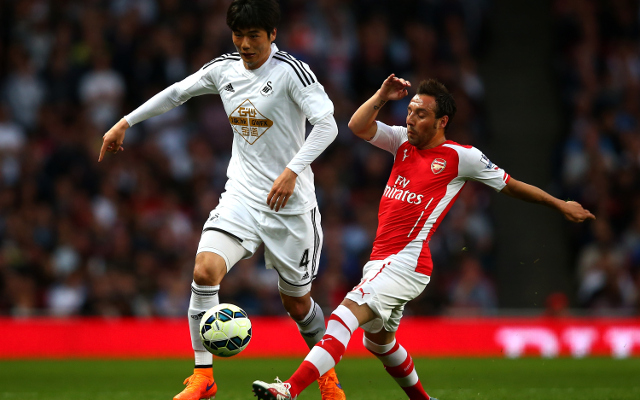 Arsenal have approached Swansea City over midfielder Ki Sung-yueng amid reports that a new defensive midfielder is a priority signing.

Despite saying that he wasn’t yet in ‘transfer mode’ [in quotes from talkSPORT] ahead of the FA Cup final on Saturday, Arsene Wenger, according to Sky Sports, has approached the Swans over the availability of the South Korea international.

The 26-year-old has impressed this season at the Liberty Stadium with his performances catching the eye of the Gunners boss who wants to bolster his midfield ahead of the 2015-16 campaign.

Ki Sung-yueng, who rejoined Swansea in the summer following a year spent at Sunderland, has cemented the holding midfield role under Garry Monk – a position that Arsenal want addressing despite the promising form of Francis Coquelin.

The former Celtic favourite has not only attracted interest over his defensive capabilities in the centre of the park, but has shown an eye for goal – scoring eight in the Premier League this season.

Nonetheless, while unquestionably talented – is he likely to pip Mesut Ozil, Aaron Ramsey, Santi Cazorla or Jack Wilshere to a place in Arsene Wenger’s line up? Unlikely.