France were unable to get their bid to qualify for the 2018 World Cup off to a winning start, as they were held to a 0-0 draw by Belarus on Tuesday.

Meanwhile, Arsenal striker Olivier Giroud also featured, but Les Bleus were unable to break down a stubborn Belarusian side who held firm to earn a point.

It’s fair to say that the French media were not impressed with what they saw from their players, with L’Equipe coming down hard on them with some pretty harsh player ratings.

Rafael Varane and Laurent Koscielny came out of the game with respectable 7s after forming a solid partnership in defence, but new Tottenham Hotspur signing Moussa Sissoko didn’t escape criticism either as he was given a 4/10.

Nevertheless, it will be a disappointment across the board as with such great quality in their team and star individuals capable of producing a moment of magic to unlock tight defences, France will believe they should have come away with all three points.

Pogba received a 5 with the report claiming that he was “not bad, just average”, while Giroud’s rating was down to a big chance that he missed which could have made all the difference.

The Arsenal man appears to be an easy target for French media and supporters when things don’t go to plan, but he’ll hope to produce the perfect response to boost his own confidence when Arsenal take on Southampton at the Emirates Stadium on Saturday afternoon. 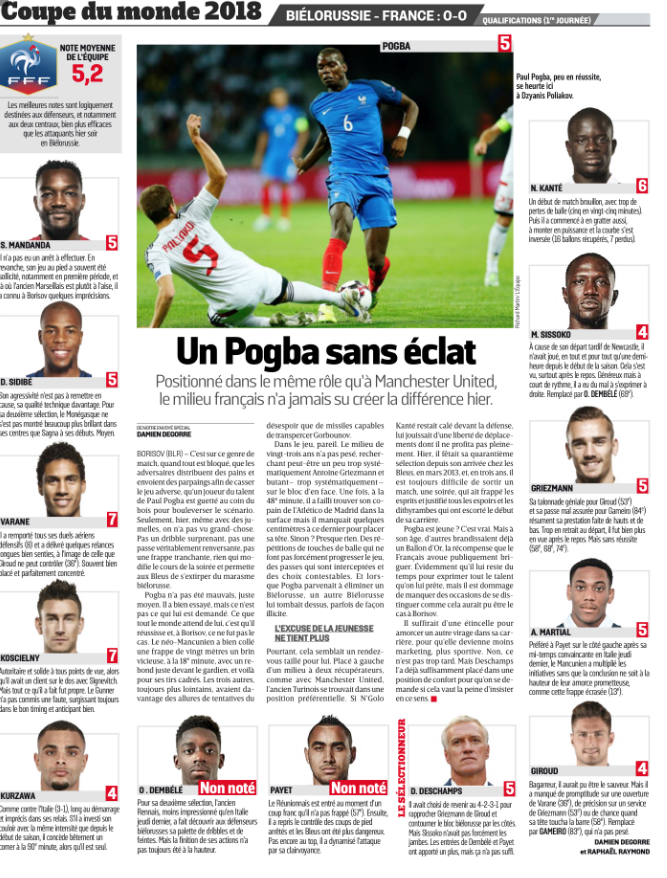