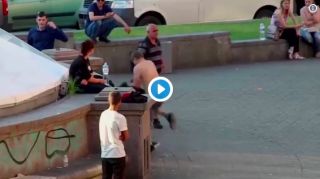 Liverpool fans enjoying the buildup to tonight’s Champions League final were targeted by a topless hooligan on Friday.

The thug was seen picking on peaceful individuals near a fountain and punched one man several times in his head, before being shouted at by a man selling scarves.

Responding to the shout, the idiot approached the scarf-seller, who proceeded to lay him out flat with one punch… all without dropping a single half and half.

Thug in Kiev tries fighting random Reds – gets whats coming to him.

ALSO READ: Man United fans argue amongst each other over whether they should want Liverpool to beat Real Madrid

This was not the first incident of Liverpool fans being targeted in Kiev this week.

One Reds supporter was left with a bloodied head after a group were ambushed at a restaurant on Thursday.