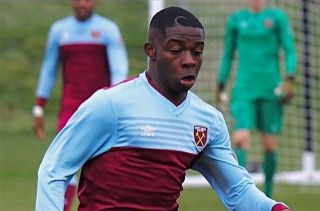 Man Utd, Barcelona, Bayern Munich and Liverpool are all reportedly interested in West Ham Utd starlet Benicio Baker-Boaitey as he’s said to be ready to leave the Hammers.

The 16-year-old has featured in the U18 Premier League for West Ham this season, and it appears as though his form and early promise has attracted plenty of attention even though he hasn’t yet signed a professional contract.

According to the Sun, via Sport1, the teenager has told West Ham that he won’t pen a deal with them when he turns 17, and so that has sparked interest from across Europe with Bayern, Barcelona, Man Utd and Liverpool all specifically mentioned in the report as possible destinations.

Given the calibre of those clubs, that arguably tells a story in itself about the talent and potential that Baker-Boaitey possesses, as he must surely be doing something right if he has some of the biggest clubs in Europe eyeing a swoop for him before his 17th birthday.

The report above suggests that his time at West Ham is likely to come to an end, and so it remains to be seen which of the four clubs named above are able to land his signature and pay a €250,000 compensation fee, as per Sport1.

It’s likely to be difficult to make an impact and enjoy a breakthrough at any of those sides given the quality and depth in all four squads, but perhaps with Bayern trying to take a leaf out of rivals Borussia Dortmund’s book with their success after signing England international Jadon Sancho, a move to the reigning Bundesliga champions could make sense if they are prepared to invest in youth and give them chances at the top level.

Nevertheless, it’s easier said than done snubbing interest from the likes of Utd, Liverpool and Barcelona, and so it remains to be seen where the exciting young talent, who is compared to Douglas Costa by Sport1, ends up in the coming years.

“I’d rather have a hole in the squad than an a**ehole” – is Ole Gunnar Solskjaerthinking of anyone in particular? READ MORE…