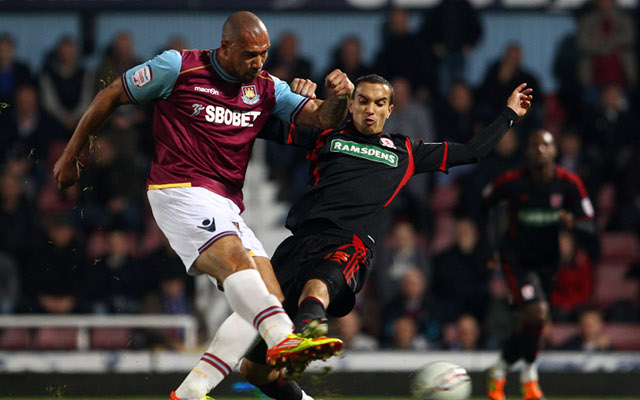 Nerazzurri to bring powerful front man to the San Siro.

The 33-year-old has been without a club since leaving the Hammers in July but the 6’5″ striker has continued to train to keep fit.

The former Norway international managed just two goals in 19 appearances in the Championship at Upton Park last term and was hardly prolific during his stints for Stoke and Villa in the Premier League.

But Inter have been forced to move for a striker outside the Italian transfer window, after Argentine Diego Milito was ruled out for the season with a knee injury, leaving the club with just 35-year-old Tomasso Rocchi as an out-and-out striker.

‘Inter are an interesting club for him because they are one of the biggest teams in the world,’ said Carew’s agent Per Flod.

‘Someone with John’s physique would be ready to play again within a week.’

Carew, who flew in to Milan today for talks, is now expected to undergo a medical before Thursday and could face Tottenham in the Europa League last-16 double-header next month.

Carew has already been training with Inter and could sign a €300,000 deal subject to passing a medical.

‘I’m ready. I feel good and I’ve worked with the team over the last two weeks,’ Carew told reporters:

‘I’ve travelled around and been to the cinema a few times but now I’m ready to give my all for Inter. I wasn’t expecting the call – life is full of surprises.’

The forward, who scored 24 goals in 91 appearances for Norway, has prior experience of Italian football having enjoyed a loan spell at Roma in the 2003-04 season.

Liverpool ready to sell midfielder after closing in on James Milner signing May 22 2015, 6:33
Liverpool FC